Start a Wiki
Were you looking for the illusion, Phantasmagoric Ignited Foxy, or The Other Ignited Animatronics?
Ignited Foxy or Foxy is an antagonist for The Joy of Creation: Reborn. He was Foxy the Pirate Fox from Freddy Fazbear's Pizza.

Like Ignited Bonnie, Ignited Foxy lacks a mascot suit on most of his endoskeleton, leaving it bare. Similarly to the original Foxy, he sports a pirate hook on his right hand.

Ignited Foxy has a long, triangular snout with a small black nose and a similar bottom jaw that sits below the snout. It is lined with several sharp, plastic teeth. Inside his mouth is what appears to be a decayed set of endoskeleton teeth.

Ignited Foxy has wires sticking out of both sides of his head, as well as four tufts of "hair" on the top of his head. Just above his left eye are a couple red and blue wires coming out of the top-left side of his endoskeleton head.

He has a right ear jutting out of a large hole in his suit's head, but seems to be lacking a left ear. The wires on the other side of Ignited Foxy's head may be just a remainder of the ear.

Also like the original Foxy, Ignited Foxy wears brown linen pants that are shredded at the bottom.

Out of all the Ignited animatronics, Ignited Foxy has not lost any limbs other than his ear.

Ignited Foxy hangs out with Ignited Chica outside the house as the glowing eyes, with only the silhouette of Ignited Bonnie visible.

When the player starts the Attic, turning on their flashlight will be a bad idea, since Foxy will start in front of them. Ignited Foxy's teaser references that it is a bad idea to do this. Like the other Objective modes, the player is given a certain amount of time, though instead of 60 seconds (1 minute), the player is given 90 seconds (1 minute and 30 seconds). The objective is to also find five objects before Ignited Foxy reaches the player. The extra time is essential for survival.

Foxy will start off under the player's crib. He will proceed to make scraping noises indicating he is beginning his attack. When his hook is visible on the back of the crib, the player must lie in their bed and close their eyes, pretending to be asleep. Failure to do so before Foxy's eyes activate will result in him attacking the player.

Foxy will attempt to enter the Living room through the left door (when facing the TV). Players can monitor Foxy's progress towards the room on the TV, and must use the pause button to both hold Foxy back and offset his position to avoid both Ignited Freddy and Ignited Foxy entering the room at the same time. When the player sees Foxy approach the door, the player must run to the left wall to avoid being seen and attacked by Foxy.

Foxy is the first animatronic to assault the player. Foxy will randomly spawn outside of one of three doors. The spawn is accompanied by a growl and possibly a knock, which will help determine what door Foxy is at. The player must look at the computers in the office and move the camera to see Foxy's eyes. After a few seconds, Foxy will look and scream at the camera before running away.

Foxy will get increasingly aggressive as the night goes on and will be able to spawn in multiple positions simultaneously. Note that if Ignited Bonnie disables a camera, Foxy can no longer appear in the entrance with a disabled camera, unless all 3 cameras are broken, in which case Foxy will still appear at the last entrance that had an active camera.

Ignited Foxy or Foxy is an antagonist for The Joy of Creation. There is not much difference in the character.

Ignited Foxy's only difference with his The Joy of Creation: Reborn self is that he has no white pupils. They will only light up while you are being jumpscared by him. Another difference in Ignited Foxy is that his set of endoskeleton teeth are showing much more clearly.

Ignited Foxy will start off lying low on the balcony. After the timer passes 3:00:00, he will start to rise slowly up. He will make no sound, unlike the other Ignited Animatronics.

You should shine your flashlight at him as soon as possible before he is fully risen, or else he will come in and jumpscare you.

Ignited Foxy running to the player in TJoC: Reborn 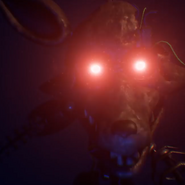 Add a photo to this gallery

Add a photo to this gallery
Retrieved from "https://the-joy-of-creation-scott.fandom.com/wiki/Ignited_Foxy?oldid=15153"
Community content is available under CC-BY-SA unless otherwise noted.