Creation is the titular final antagonist in The Joy of Creation: Story Mode. It is an amalgamation of all four Ignited Animatronics.

Creation is a mangled mix of Ignited Freddy, Ignited Bonnie, Ignited Chica and Ignited Foxy.  As such, it has many of their features. Creation's upper head belongs to Ignited Freddy, now lacking both ears, with wires coming out of where they used to be. The lower jaw is Ignited Bonnie's. Both suit parts are now a dull grayish blue. The animatronic's torso and limbs are exposed endoskeleton parts, covered in wires, similar to the Fallen. It is noted that the bow tie belongs to Ignited Bonnie, but for the torso, it is unknown, but could still be Ignited Bonnie's since the bow tie is already on the torso. Creation has four arms. The first set is Ignited Foxy's. A lower set, located under the first belong to Ignited Freddy, as Ignited Chica completely lacks forearms while Ignited Freddy doesn't. Like Nightmare Mangle from Five Nights at Freddy's 4: Halloween Edition, Creation has three legs. Two of these are Ignited Chica's, indicated by the suit feet they have. A third leg is completely bare and extends from behind. The animatronic who owns this leg is most likely to be Ignited Foxy. However, the foot doesn’t belong to Ignited Bonnie, because that Foxy's foot is wide open, Bonnie's is closed, and the third foot shown in the picture is open. Creation's eyes are black, with bright red pupils which are presumably Ignited Bonnie's.

Creation starts in the Basement Camera, and he will slowly make his way to the attic in an attempt to kill the player. Creation has three positions in each camera: the first position is the starting point, the second position is in front of the camera's view, and the third position is immediately before Creation destroys an obstacle and moves up a floor. A "roar" sound cue plays when Creation moves to its second position. To prevent this, the player must use the flash breaker to drive him back to its first position, which when Creation also roars. Delaying or neglecting this task will cause Creation to damage the obstacle and move up a floor. Flashing Creation in the third position is too late to return it to its first position. Once Creation has destroyed the final obstacle( Which is in the office), it will rush up the trapdoor behind the player and kill them. There is no way to stop Creation unless you manage to beat the night before he kills you. On rare occasions, you can find Creation and Ignited Golden Freddy on the same camera so you can zap both at the same time, which would be a big help, however, you shouldn't get cocky because Ignited Golden Freddy usually teleports shortly after.

An image of Creation used for one of the hints in the Attic.

Creation in the extras menu 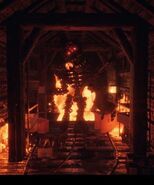 A still image of Creation before walking up and killing the player.
Add a photo to this gallery
Retrieved from "https://the-joy-of-creation-scott.fandom.com/wiki/Creation?oldid=17923"
Community content is available under CC-BY-SA unless otherwise noted.